Busy day on the trail.  I’ve edited about 15 of the 600+ shots I took today. It was a very eventful session – beginning with the huge scratch I got on my wrist as I rode the bike through some spooky brush that jumped out to attack me. After I stopped the bleeding and stood in my favorite spot on the trail  … NOTHING happened for at least 45 minutes. I was dripping with sweat. People who passed had to be wondering what this crazy  looking old guy was doing.

Then all hell broke loose. Four Ospreys suddenly swarmed around. A group of gulls flew in. My two favorite Ospreys couldn’t decide who would fish and who would hold down the nest.  And then – out of nowhere – the young Bald Eagle soared onto the scene, being chased by those gulls. Shortly after he escaped into a tall Pine, a Great Blue Heron soared right past him and lit in the top of a nearby Pine. Then an Osprey dove at the GBH and he took off.  And that was all before I finished off my lemonade fortified sweet tea.

So … here’s the only image I’m going to share at the moment.  Not that there aren’t a lot more. It’s just too hard to decide what to do with them.

So – here’s your immature Bald Eagle, very angry at the gulls who were chasing him. (I know it’s not a great shot. He was pretty far away. But I like the action.) 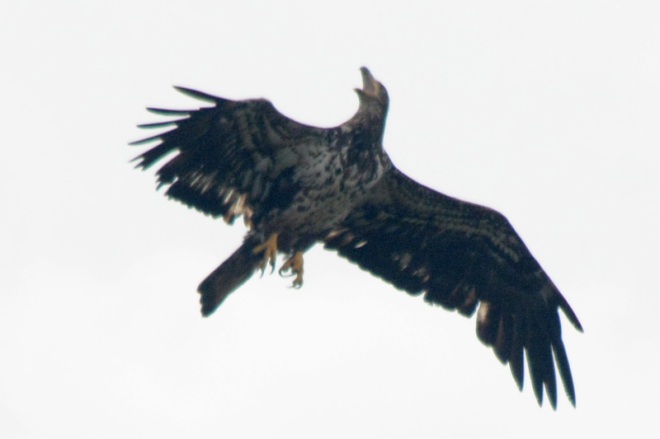