She’s still just sitting on the nest. And yesterday morning there was no parent in sight. But she sure can yell, and I got the impression she was saying “Somebody Feed Me. I’ve got a lot of growing up to do.” 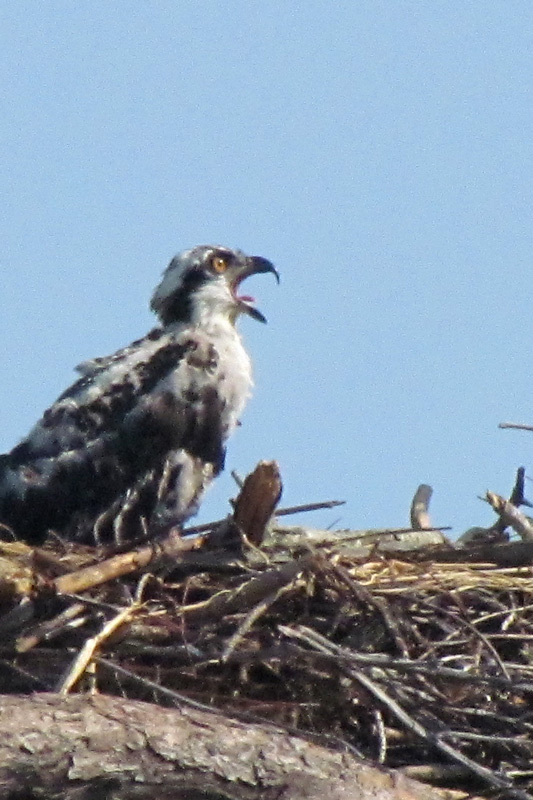 Yesterday’s image didn’t do her justice. Here’s a closeup I just discovered. 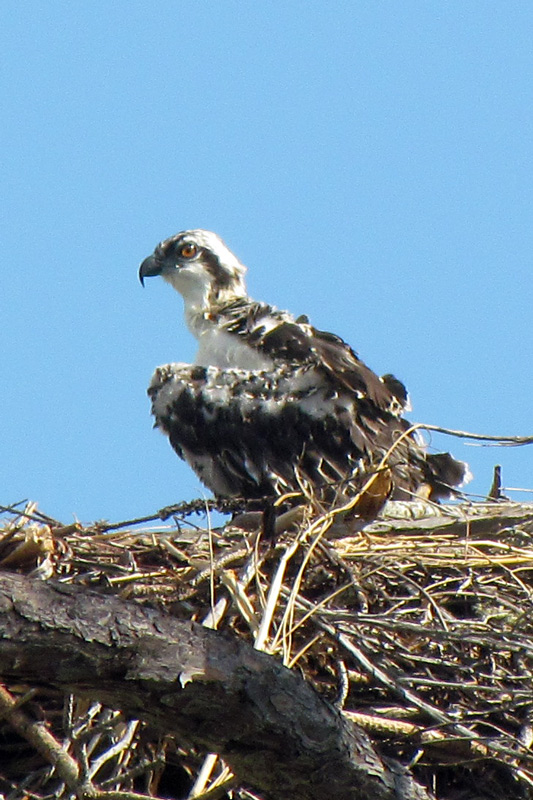 (The ironic thing is that I normally takes these images with my “big boy” Nikon and one of two powerful telephoto lenses.  This image was a “grab shot” I just happened to click off while my little point-n-shoot Canon was recording video. It’s by far the sharpest closeup image I’ve captured of this little bird).

This chick should be grown and flying by now, catching its own food and developing it’s powerful flying skills. 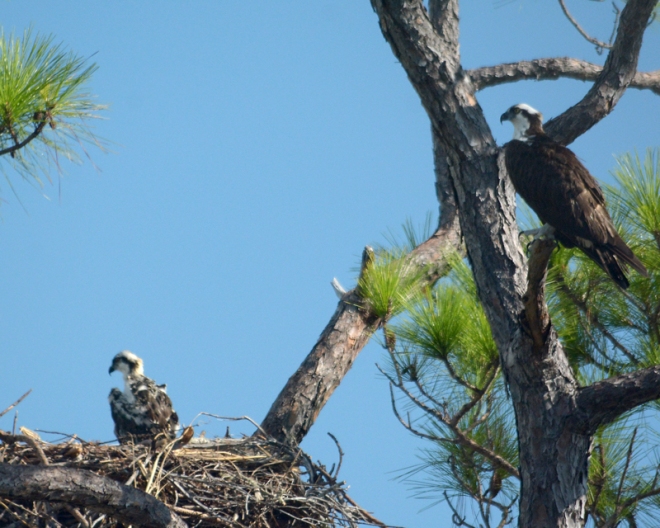 Of the eleven Osprey chicks I’ve followed this season, this is the only one left behind.

She seems to sit upright, and flaps her wings a bit from time to time. But that’s about all.

I first realized her problem Saturday and went back out this morning. Saturday she was all alone in the nest, but today her mother was there, Not tending the chick, and I didn’t see if she was feeding her, but there nevertheless.

Nature will work it out I’m sure. It always does.

(Added after I watched the video recorded today: I didn’t realize she’s doing a lot of vocalizing. I mean a LOT.  Maybe she’s stronger than I think. And maybe she just got a slow start. That’s what I’m hoping.  I posted some of the video on Facebook, if you’re interested.)

Yesterday I watched this youngster (don’t know if it’s M or F) for a while. It was hanging around the old home place, alone, then went off to hunt. A few minutes later – I’ll call it “she” – she came back with her catch. 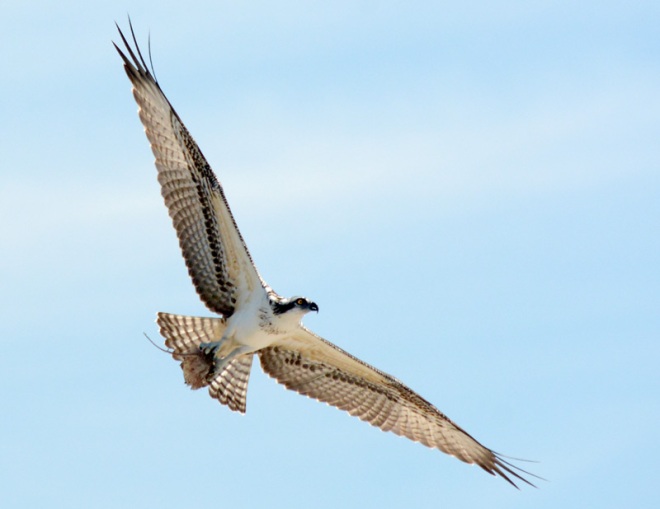 But I don’t think she quite knew what she had or what to do with it. Finally, she flew to the Pine that’s the favorite dining area for the birds from this nest and tried to hold it down – it was very much alive! – and figure out where to start. By the way, it was a baby Sting Ray. 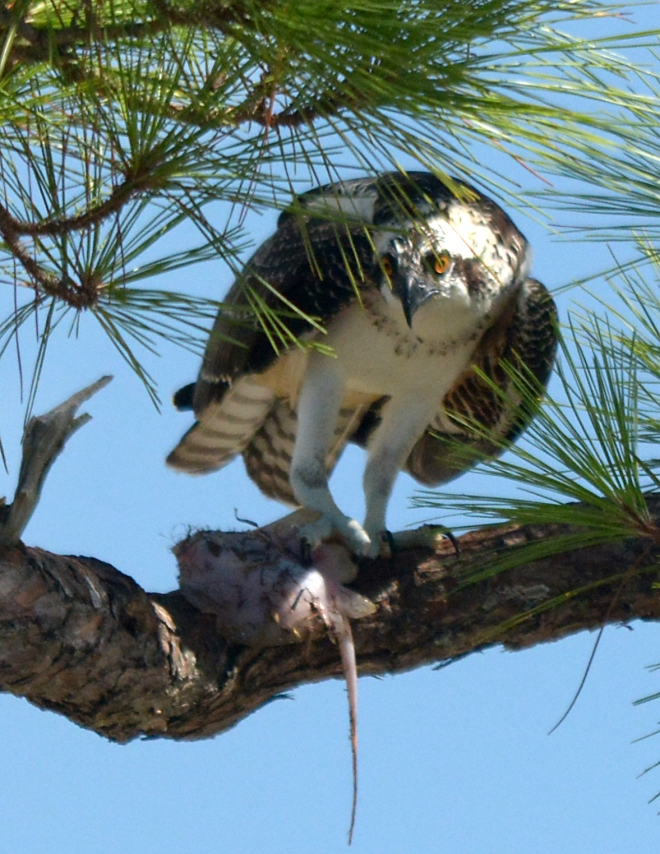 Normally, with a fish, Osprey’s start at the head, eat half way down from the top, then share the rest.

But this thing didn’t seem to HAVE a top. And what was with that long dangly thing? 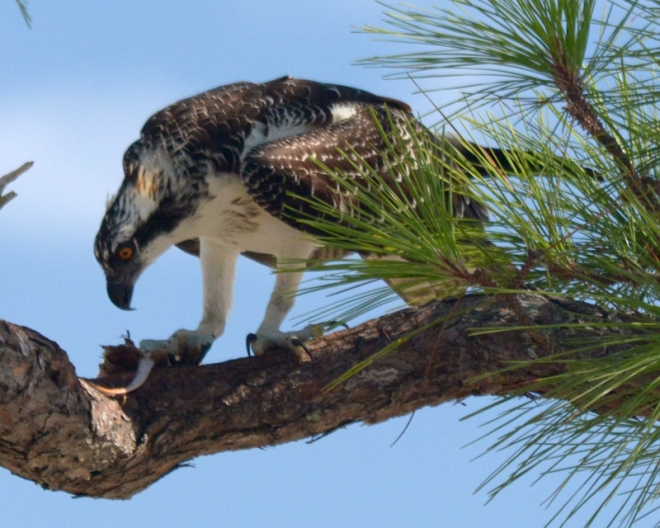 Thing wiggling. Bird pondering. Lost her grip and – Bam! – it fell to the ground. 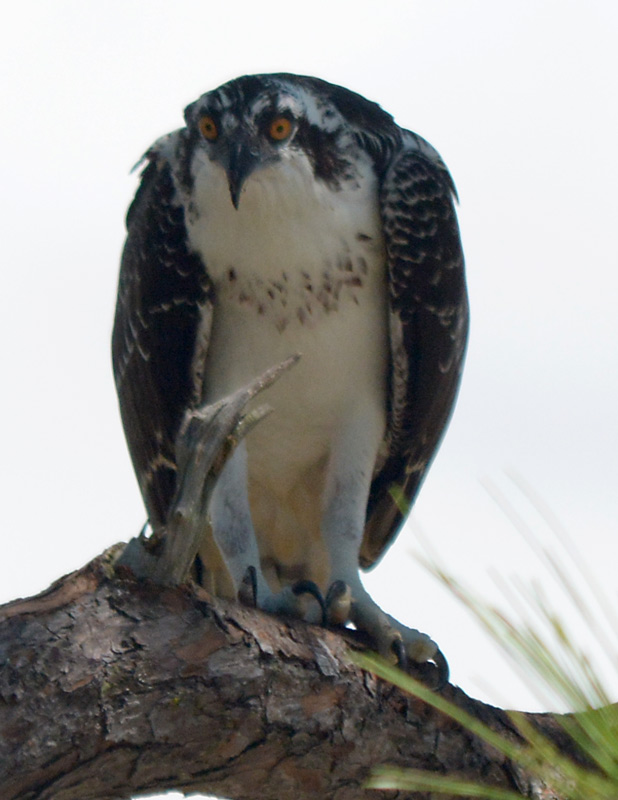 That’s when I decided to leave the poor thing alone, and back off far enough that she might feel safe in diving down there in the tall grass to retrieve it.

I don’t know if she finally got her meal, or figured out what to do with it. I left the area so she could have some privacy, and went off to check on this little guy. 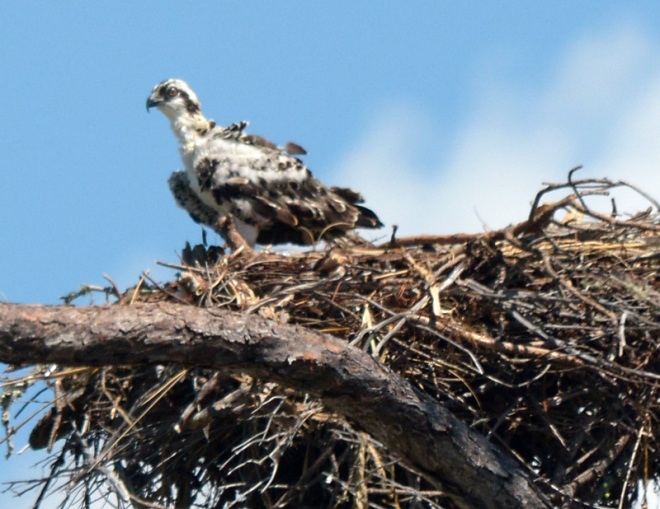 In a nest not far away, this sickly looking Osprey chick seems to be afflicted with something. It’s the only chick left in a nest this season as far as I can tell. I wasn’t there long enough to see if he/she is still being cared for. It seems somewhat active and alert, just no way to know why it hasn’t fledged out fully. I’ll be back to check on it soon. And I sent a report about it to my friends at the NPS.

The nest is getting a little bit crowded when they try to get together these days. It won’t be long before the parents leave town for good, and the kids won’t be far behind. 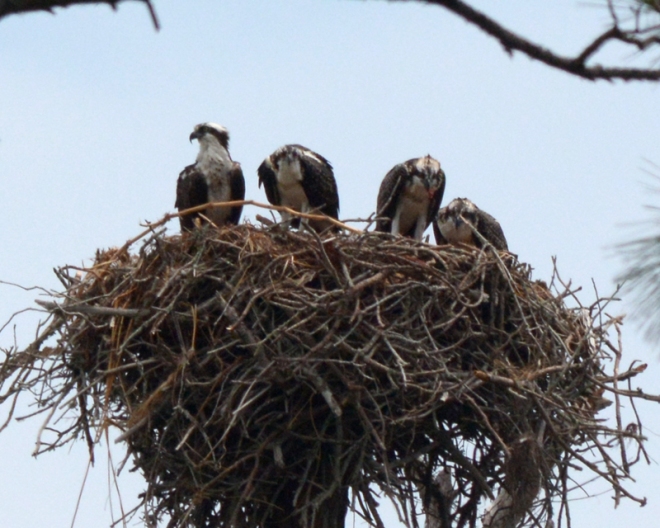 She just sat there on her limb and waited for the tottering old photographer to wind his way through the briars to get close.

I feel like a grandfather or something – because I was there when she was born, and have watched her and her sibling grow these past few weeks.  And now just look at her!

Mom and Dad have left, maybe her sibling too. But she’s still hanging around, close to the old home place. 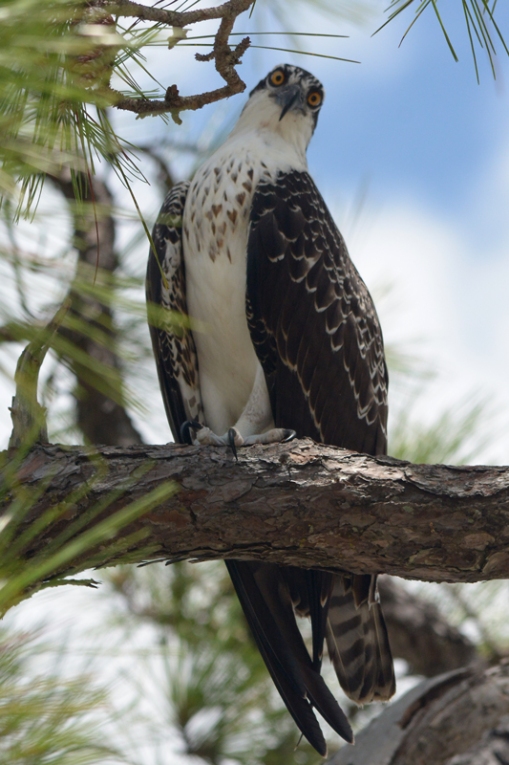 I think the Skimmer won. 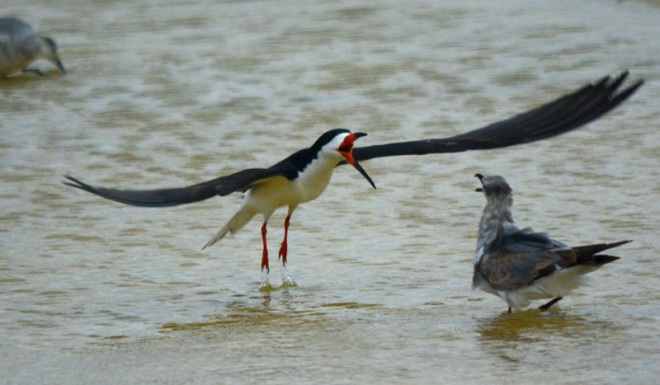 Remember that “impossible” nest I followed all Spring, and how I was surprised when this “obviously young” female attracted a boyfriend who finally helped her build a nest in an impossible location? And concluded that they were just “playing house.”

And I was certain there would not possibly be any chicks …

Well,  I went back for a visit yesterday … 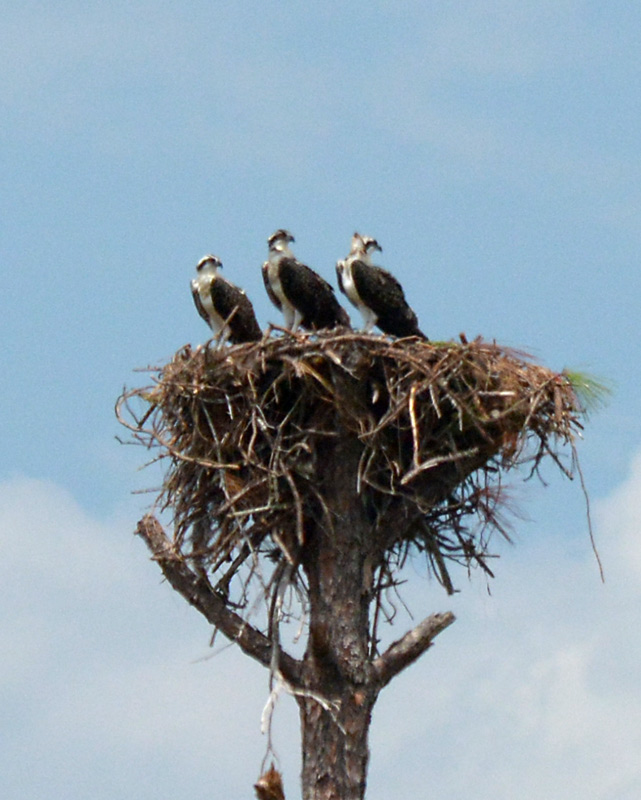 Today. Mom and the two kids are ready for lunch.

Notice – Dad has already eaten his share before he ever brought it to the nest. 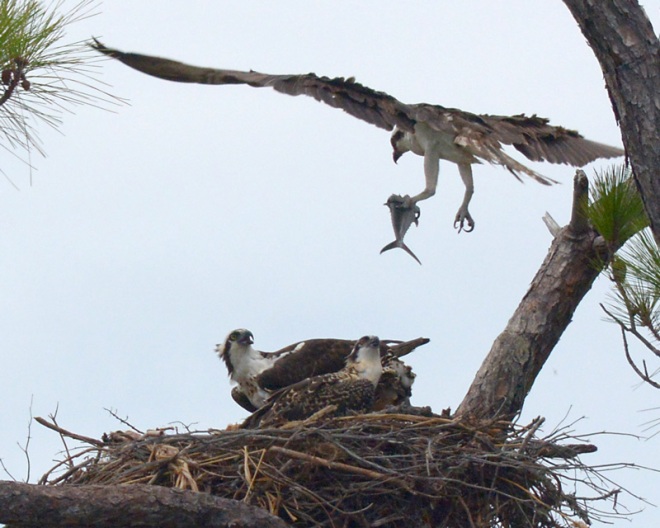