I’ve been very lazy in the past couple of weeks and haven’t posted anything. But that’s not to say I haven’t been out there shooting. About three weeks ago I discovered a brand new Least Tern nest that was SO close to the road I was sure it wouldn’t survive. I mean – less than 12 inches from the pavement!

There were three eggs. And you can see for yourself how close to the road they were! 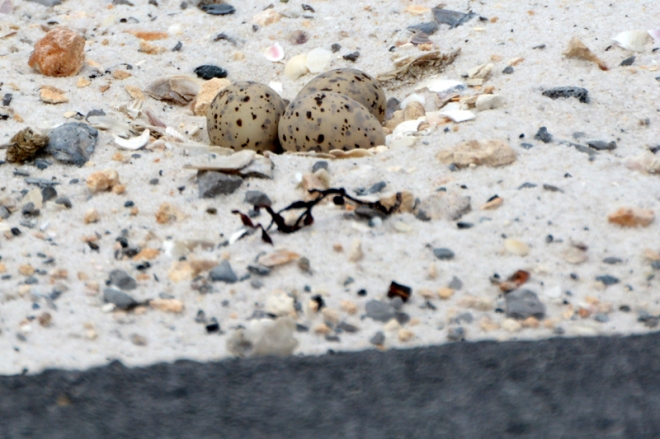 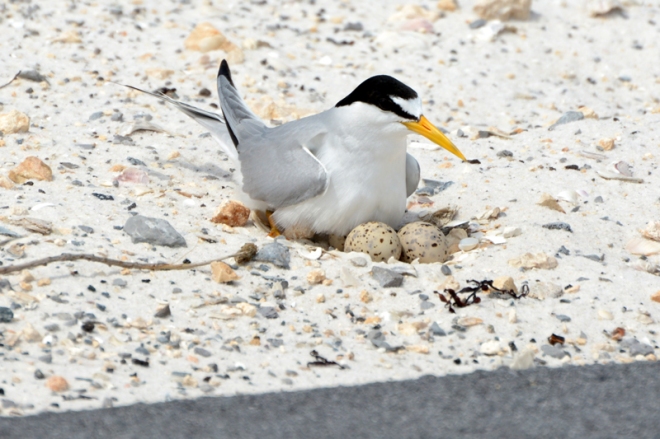 So I decided that this nest, this family, would be my Spring 2017 Least Tern project. I visited at least five or six times, and every time I pulled up close – but not too close! – I was amazed to see that the eggs were still there, that mom was being attentive, and that dad was bringing her fish regularly. Together they fought off various interlopers and potential preditors (as Least Terns must always do!)

Of course, all this observation took place from inside my car (I had the window rolled down) and from across the road, so that I wasn’t too close. Anybody who knows anything about Least Terns knows that they will attack you if you are walking or riding a bike anywhere within their zone.

I took lots of pictures of the nest and the eggs, etc. But nothing really interesting – Until yesterday.  As I drove up and eased to a stop, I realized that there were huge tire tracks in the sand surrounding the tiny nest. AND that one of the eggs was missing.  But mom was still there, and, as she moved around restlessly in the nest I began to realize why: Chick #1 was just being hatched!  I mean in that moment – as I watched! And it wasn’t long before it popped out from under mom and said hello to the world for the first time.

Well, I try not to linger nearby for too long, because I’m pretty sure even my subtle presence tends to make them somewhat restless; especially dad, when he comes to feed. So I left for a few hours. But after a trip back home and a Father’s Day ice cream bash with the kids, I went back, and stayed until the sun was getting low.

This is the last image I captured late in the day. I’ve titled it “Me and my little bro.” (Notice – they’re still only inches from the pavement!) 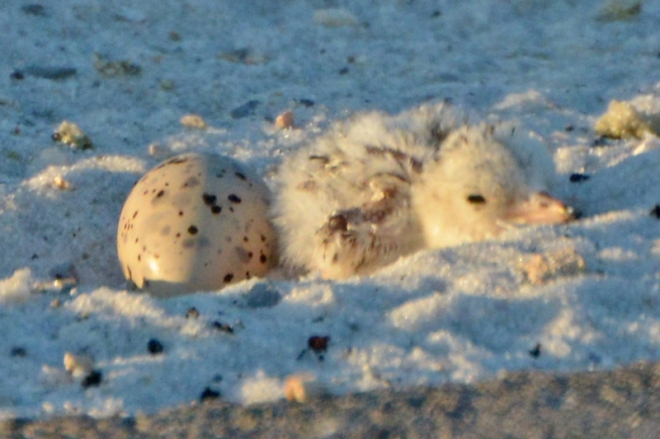 So! Today, of course, I had to go back. And it’s been really exciting.  Sometime during the night the second chick hatched.  By the time I got there he/she was wobbling around – not nearly as agile and strong as his older sibling, but making progress.

Then, out of the blue – while I watched – Mom did exactly what I had been hoping she would do. Something she could not have done until both chicks were mobile.  (I suppose it would be kind of difficult to roll eggs across the sand.) She MOVED the nest.  She simply walked a couple of feet farther away from the pavement and scratched out a new hollow place in the sand (That’s about as much nest building as Least Terns do).  Then she called and cooed gently to the two fuzzballs, and – miraculously! they followed her.

Dad brought some lunch, so I decided to get away for a while, and drove down the road to check on Ospreys.

But when I came back for one last look before heading home for the day  … darned if she hadn’t moved again. Even farther away from the road. And now nestled at the base of a small dune, which makes it even less likely that some oaf will walk over them.

So, for now, they all seem safe and sound. Of course, I know from experience (and the nest I followed last year) that it won’t be long before those two lively little chicks will be running all over the place, creating their own chosen spaces to settle down. Mom and Dad will now spend the next 6-7 weeks chasing them down, shoveling a fish down their throats (they need to eat two fish an hour!), and sheltering them from the sweltering sun whenever possible.