I sat down under the picnic shelter at Battery Worth Sunday, to check on the two Osprey chicks I’ve been reporting on lately. A fellow came along on a bike and we talked about the birds for a while. Then he asked “do you ever give them names?”

The answer’s no. But sometimes I’m tempted. And if I ever do, I’ll name this beautiful young female (currenly my favorite bird to watch)  “Prima Donna.”

She and her younger, smaller sibling are my favorites these days, so close to the end of the season. And they’re certainly capable of fishing and fending for themselves. But – hey! – they’re still kids, right? 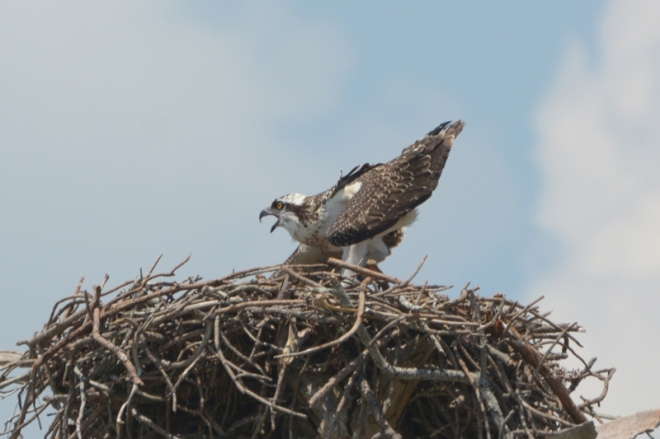 She flew into the nest just as I was arriving, and was squawking up a storm. All alone up there, I wondered why so noisy. Then I spotted her father over in the pine grove, with a fresh-caught fish.

And she WANTED some! So … being a nice and caring father, he brought his baby girl a snack.

Then he headed off to the local Pine Tree motel to grab a snooze.

In that same Pine Tree motel, her little brother (I THINK he’s a he!) was hanging out on his favorite branch and contemplating his favorite stick. (He’s a weird little guy. He ALWAYS sits right there, in that exact spot.)

But that delivery caught his eye, so he decided to pay his dear, sweet big sister a visit. And, maybe, horn in on her good fortune.

But she was having none of that! And she yelled at him, making him feel sad. Then she dragged her fish to the other side of the nest and shielded it with her huge wings, so that he couldn’t even SEE it. 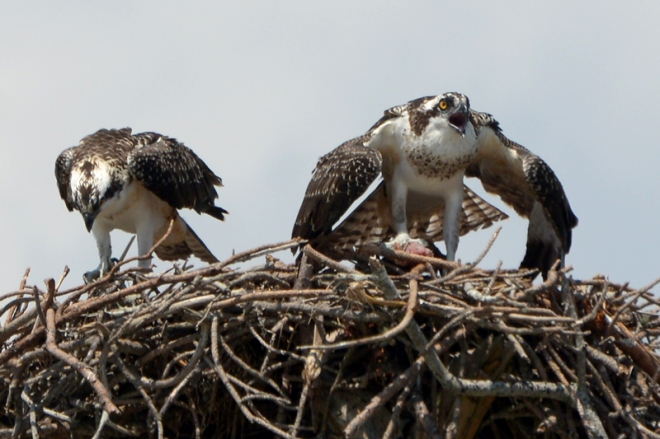 She ate away happily for close to half an hour, only occasionally glancing his way, until she had finally had her fill and was willing to share.

There wasn”t much left. But beggers can’t be choosers. And we KNOW who the Boss Baby is in this nest. 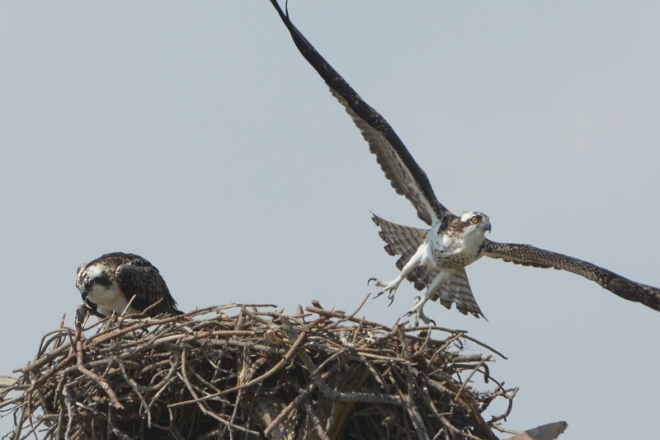 Finally, she left, and he got to enjoy his snack in peace and solitude.

Dang! Big sisters are a pain in the ass.