We ventured out for a walk around the neighborhood yesterday and came more or less face to face with our largest and most prominent avian neighbor, whom we have named Tevor. He was standing down on the walkway that transects the several ponds making up our front yard, and quite happy with his status … until we approached.

As we walked slowly and respectfully, closer and closer, he showed no intention of bolting, so we kept coming. At last we were within 10 feet of him. The perfect opportunity to grab a few closeup shots with my trusty little Canon SX40.

And here are the results:

Trevor appears to be in full breeding plumage, with all his fancy chest and back feathers flying in the wind, and his top-knot in full display. The tops of his shoulders are getting the distinctive brown feature and his bill is beginning to turn bright blue up near his eyes.

At one point he turned to look directly at me, as if to demand “Who Dat?” (Which is an epression I had to explain to Jerri). Maybe he’s from Louisiana. Anyhow, I love this expression.

Then he decided we were, indeed, too close and he jumped up on the rail and slowly walked away.

Notice the pinkish tip on one of his toes. And the claw is missing. I’m guessing that it might have once been caught in some fishing line and he lost it. I’ve seen GBHs in the past with feet terribly gnarled and scarred by fishing line that was carelessly left lying around.

Shortly, he decided that he’d had enough of us and flew away, up onto one of the many second or third level patios he can choose from since Baywatch seems to be about 90% empty right now. And that’s when I caught this shot – showing us exactly why they are called “Blue,” not to mention “Great.” 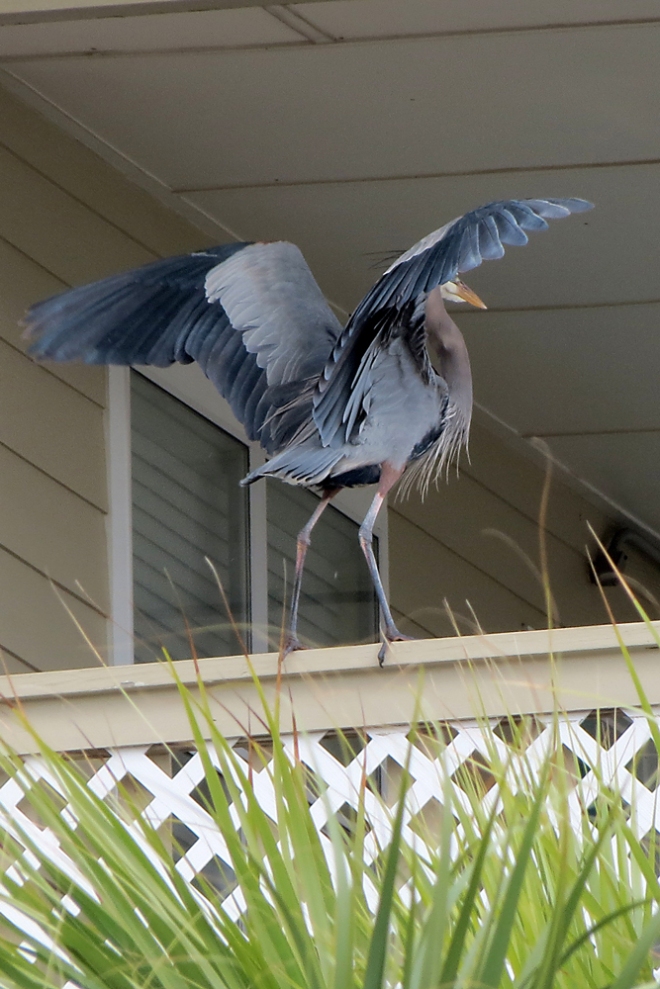 Then, as we walked farther out and onto the pier we also got a pretty close view of the Snowy Egret that Jerri has decided to name Oscar. He’s a pretty thing, and although I was fairly sure that he was a Snowy, I wasn’t positive until I got a good look at his bright yellow feet. That nails it. 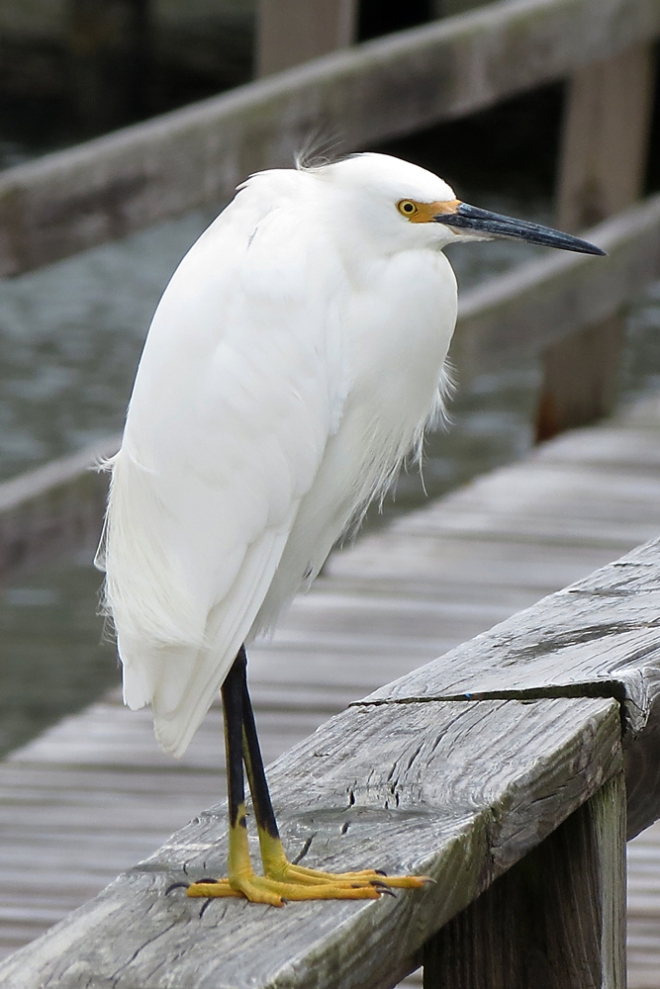 Oscar seems to be fishing the shallows of these ponds, so I assume they must be stocked with some kind of little fish. But I haven’t seen Trevor fishing here yet, so I doubt that there are any fish that would be large enough to tempt him.

So … Our new neighbors, Trevor and Oscar. There’s also a beautiful, and very active, Kingfisher that perches on a lamp pole not far from our balcony. But they are notoriously skittish and bolt at the slightest movement, like us opening the patio door to go outside and get a close look. So … maybe later on the Kingfisher.

2 thoughts on “The New Neighbors”