Just a brief visit yesterday to check on the progress or Big Mama and her young studly mate. She was sitting on the nest, squawking like mad, so I knew he would be coming along shortly with an offering. And he did.

She examined it closely. A nice, foot-long Needlefish. And apparently she approved. But it did take some wrestling for her to get it under control. It was still very much alive and apparently didn’t care much for the idea of being eaten.

She, literally, had to wrestle it into submission – face down in the nest.

But then she had it and was off to enjoy her dinner alone.

The fish wiggled and squirmed, but she was not about to let it escape those lethal talons as she soared across to the Pine Tree Inn, her favorite dining spot.

Then she settled down to really get on with it. I realized some time ago that Big Mama has chosen this Pine Tree as her dining spot because she can get down inside it, thus avoiding quick attacks from other birds who would like to snatch away a nice fresh fish. Big M’s mate and all her chicks, year after year, also choose the Pine. It’s a family tradition, I suppose.  And I’ve never seen another bird succeed in snatching anything away from the family when they’re in this tree.

So … I left her to her dinner and headed back down the road toward home. Along the way I noticed that a pair of Ospreys had, indeed, formed a nest in the top of the chimney at the campground check-in station. As I passed and grabbed this shot,  the female seemed to be content on the nest and her mate was watching from a radio tower nearby. 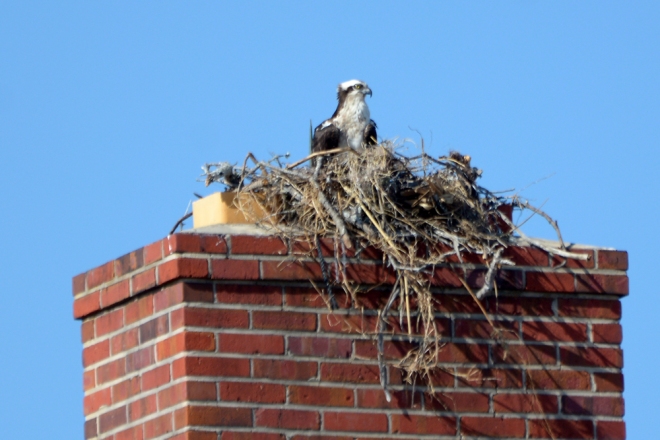 I knew storks did this in Europe. But I’ve never seen Ospreys do it.  Hope nobody sets a fire down there.

One thought on “Yesterday – Big Mama Takes Over”